How to build a metro station, including a tunnel, below the historical building of Amsterdam Central Station, while trains continue running and passengers continue to make use of the station? With this challenge, Strukton got down to work. The solution was found with new engineering techniques and smart phasing.

One of the key requirements during construction was that it had to be possible for passengers to continue to make use of the station. That was quite a challenge, given the large number of activities carried out at the same time. Activities were planned with passengers in mind. For example, dust barriers prevented inconvenience to passengers by keeping work activities out of sight. Noise pollution was kept to a minimum by planning activities such that work below the station could be carried out during night time. 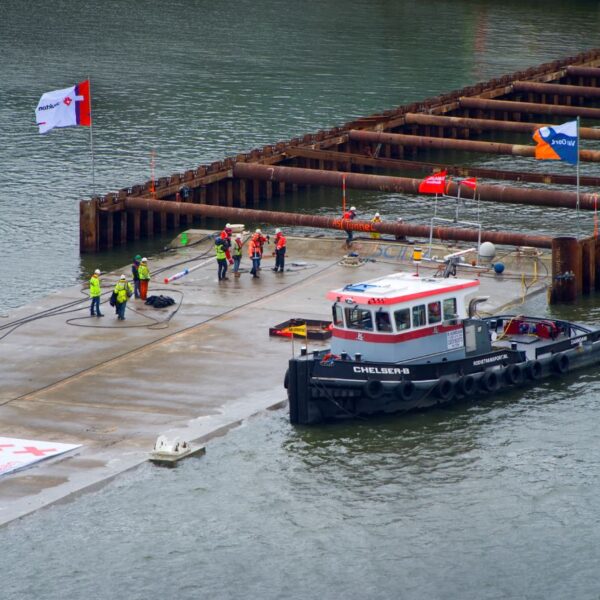 Strukton is a world leader in the immersion specialism. We position tunnel elements and caissons accurately to the millimetre on the bottom of a river or sea. The immersion process remains the same. Execution is always custom work.

With respect for the historical building

The CS Metro Station is located 20 m below the Voorplein plaza directly in front of the Amsterdam Central Station’s main entrance. By first creating the roof over the construction pit and then conducting further building and excavation work underneath it, inconvenience for passengers in and around Amsterdam CS was restricted. Due to its mystical appearance, the Metro Station has been nicknamed the Cathedral.

To be able to construct the tunnel, it was first necessary to give the historical building and the rail yard a new foundation. This meant that the old wooden foundation piles below the station building as well as under the rail yard had to be removed and replaced with a new foundation. The universally tested table construct was used for this purpose. A new structure was conceived for the ‘table’s legs’: {the sandwich wall} and vertical micro-tunnelling.

The North/South Line was commissioned on 22 July 2018. The Line saves passengers travelling North-South and vice versa 15 minutes of travelling time.