How Harry overpowered the Russian Bear

Temperatures far below zero, mountains of snow and a strong wind: the Russian bear had entered our country. That resulted in many frozen switches. Harry Dingemanse, Mechanical Engineer 1 in the Province of Zeeland, defied the harsh winter weather to fix breakdowns.

Approximately three quarters of all switches in the Netherlands are equipped with gas heating. But when it snows and there is a strong wind the gas flame goes out and everything freezes solid. You do not have that problem with electric switches. We spent the entire week thawing gas-heated switches. Once you determine that a switch is frozen stuck, you must submit an out-of-service request, so you can work safely. One colleague uses a large blower, a leaf blower in fact, to blow away the snow and another colleague follows with a burner. This melts the ice. That’s a rather pleasant job, because it keeps your feet toasty warm. Furthermore, when you point the burner a certain way, the heat will also come up. That allows someone else to stand beside it to warm up a bit. This is how we alternated.

“Some colleagues were badly affected by the cold. They were dressed like Teletubbies and you could almost roll them along.”

But the cold doesn’t really bother me. I am simply never cold. My father used to be a milkman and I was allowed to go with him, perhaps that’s why. Of course I dressed warm: shirt, thermal sweater, sweater and winter coat. I also wore thermal underwear and jeans, a pair of socks and work shoes with steel toes and heels. And of course, a scarf, a hat and my helmet, but no gloves. My hands are never cold, which is really lucky in this kind of work. I only wear gloves when the work I do is very dirty, but otherwise I don’t. Some colleagues were badly affected by the cold. They were dressed like Teletubbies and you could almost roll them along. Even so they were still cold. Sometimes we sent a colleague back to the bus a bit sooner to warm up. The others then completed the job. Our employer gave us instructions through means of a toolbox. Dress warmly, look out for each other, go inside every few hours and drink something warm, that sort of thing. And of course, take enough food with you. As we always say, you can’t pour from an empty cup.

As we always say, you can’t pour from an empty cup

It took about half an hour to do each switch. But sometimes it was a hopeless task. You then managed to get a switch going, but as soon as you went to the following switch it stopped working again. If all of our switches were to be heated electrically, I am sure this would reduce the impact of the cold weather by 90 percent. But of course I understand this would come with a hefty price tag.

While everyone in the Netherlands was skating I was busy thawing switches. Our only interest was to get the trains back into operation. The fact that I was unable to go skating did not bother me in the least. The last time I went skating was years ago. I had figure skates and a piece of metal broke off within ten minutes and my feet were sore. So no more skating for me.

When the thaw came, the frozen switches literally melted like snow in the sun. But that caused other problems. After a period of frost like this you end up with deflections: subsidence. Normally speaking, the ground below the tracks consists of dense, solid clay soil here in the Province of Zeeland, saturated with water. As it freezes the ground becomes solid, but that doesn’t cause any problems for the tracks. But as soon as the thaw sets in, the tracks subside into the saturated substrate. That means we need to tamp the tracks. This is done manually, which means you are handling a heavy piece of equipment the entire afternoon. We may also do this during the night with a tamping machine or a lorry.

I like any season and I found the frost magnificent, but now I am looking forward to spring. The scent of all the flowers, the beautiful colours, the bright green tree leaves, the farmers working outside in the polders, I really enjoy all that. Furthermore, the temperature is pleasant: a thin sweater and a vest and what better then than to work outdoors? 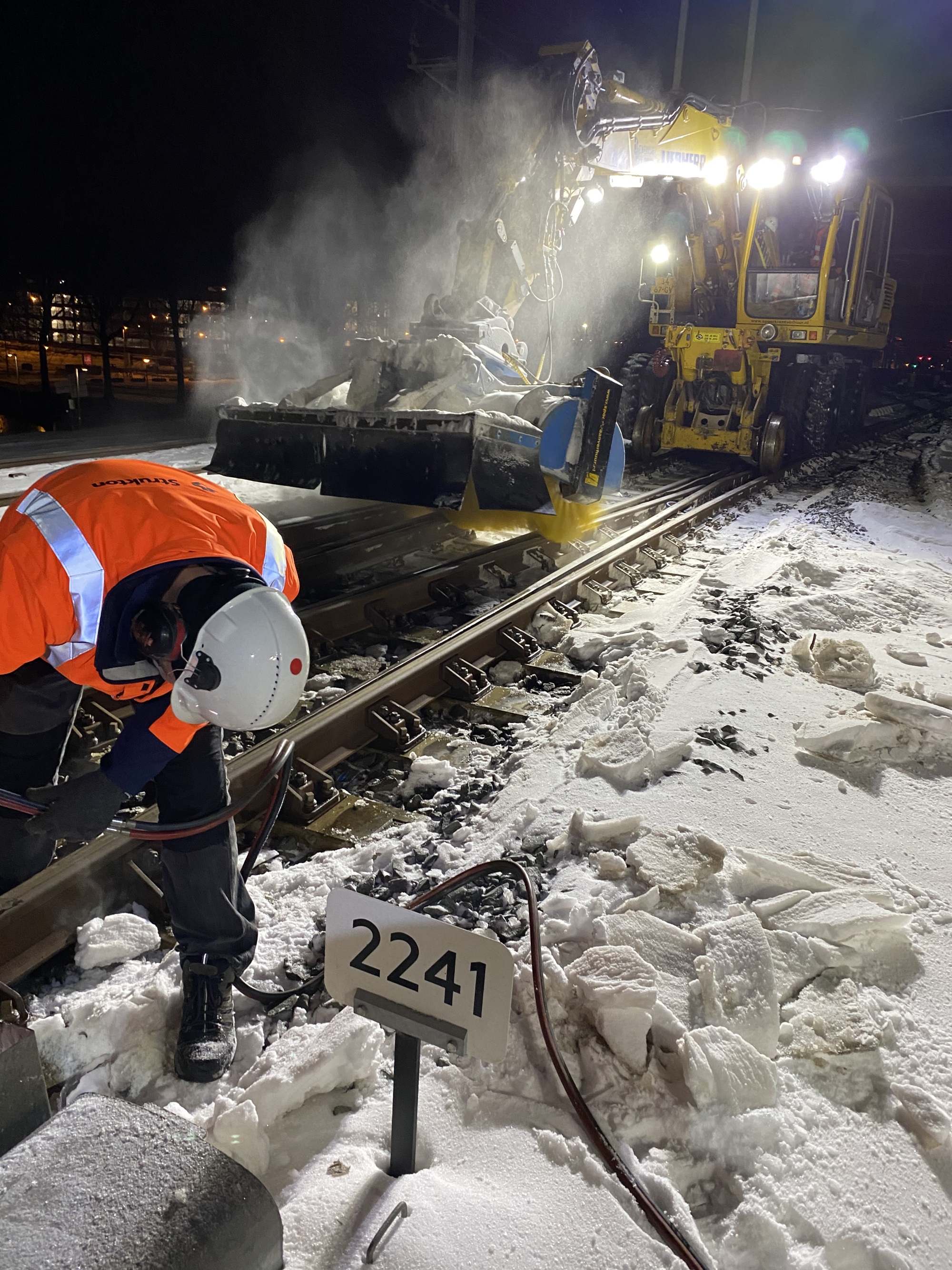 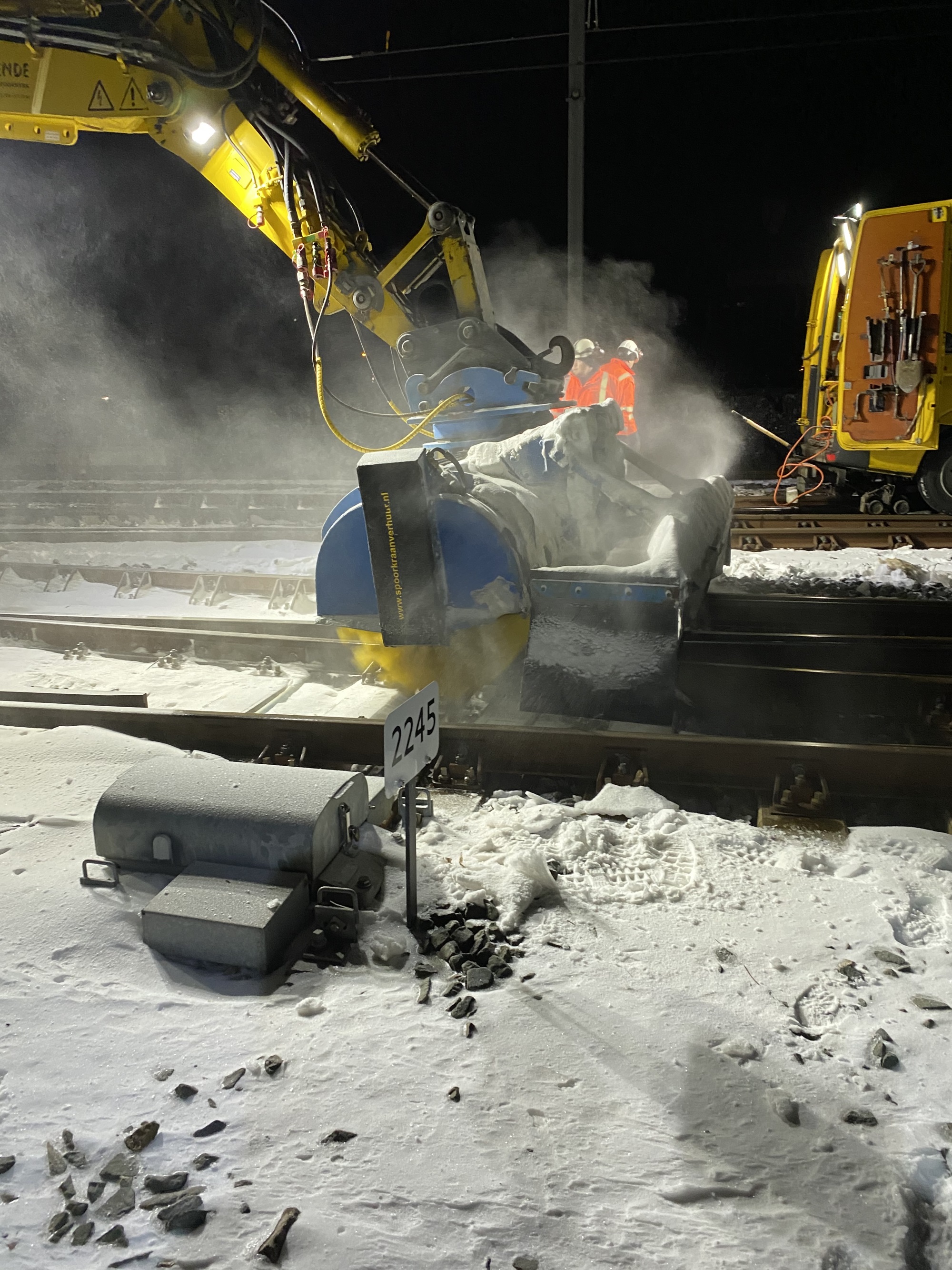 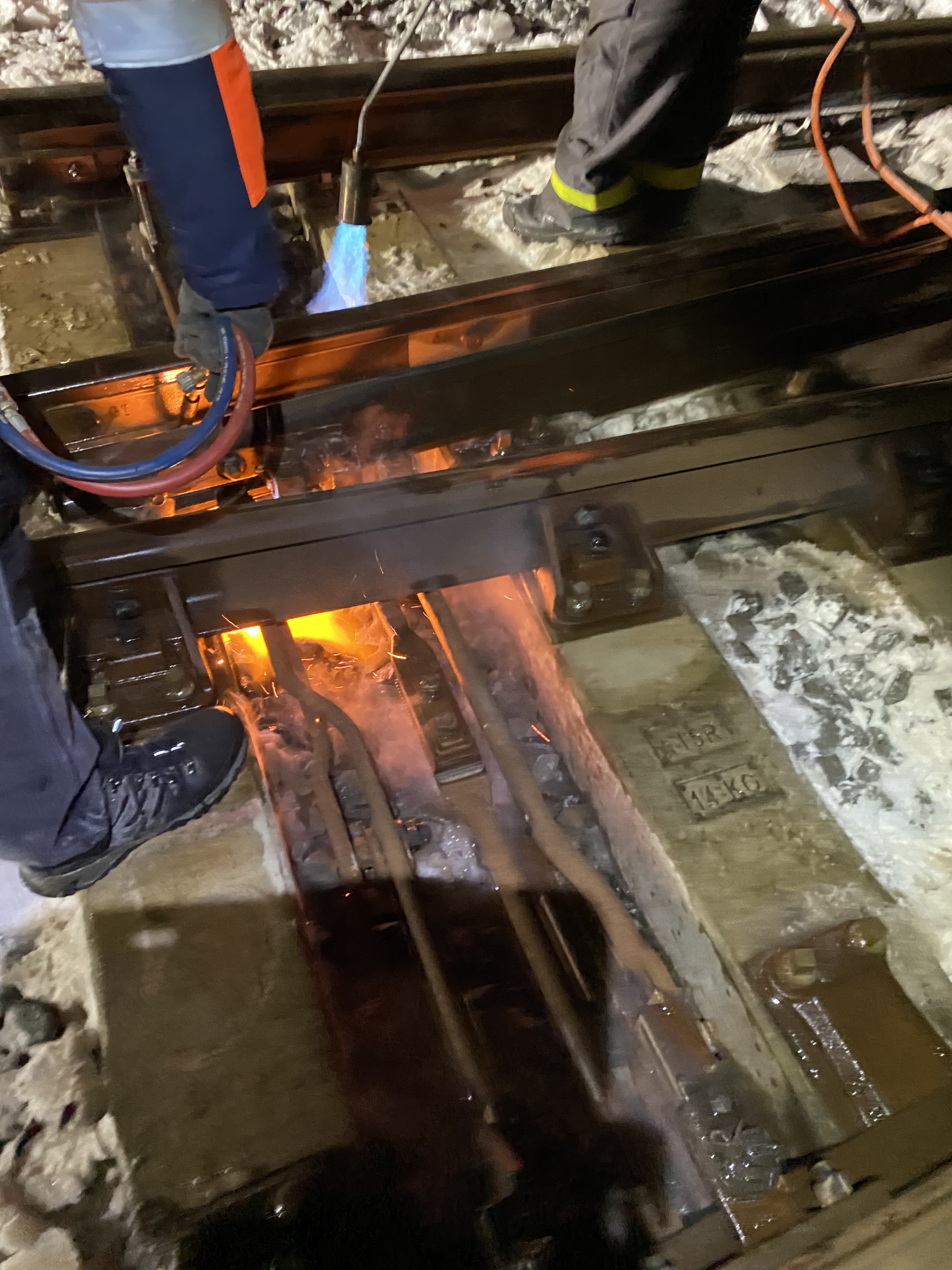 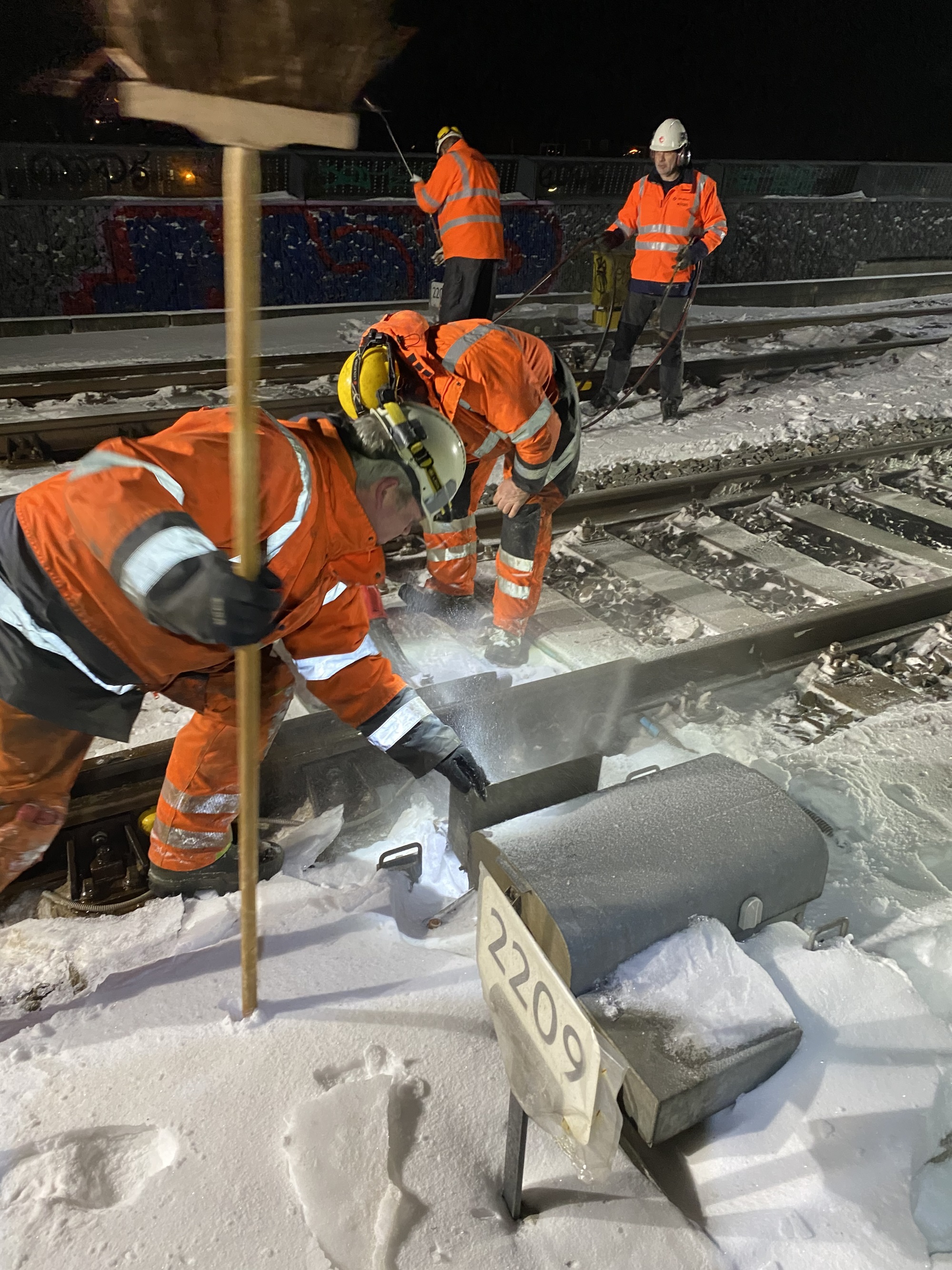 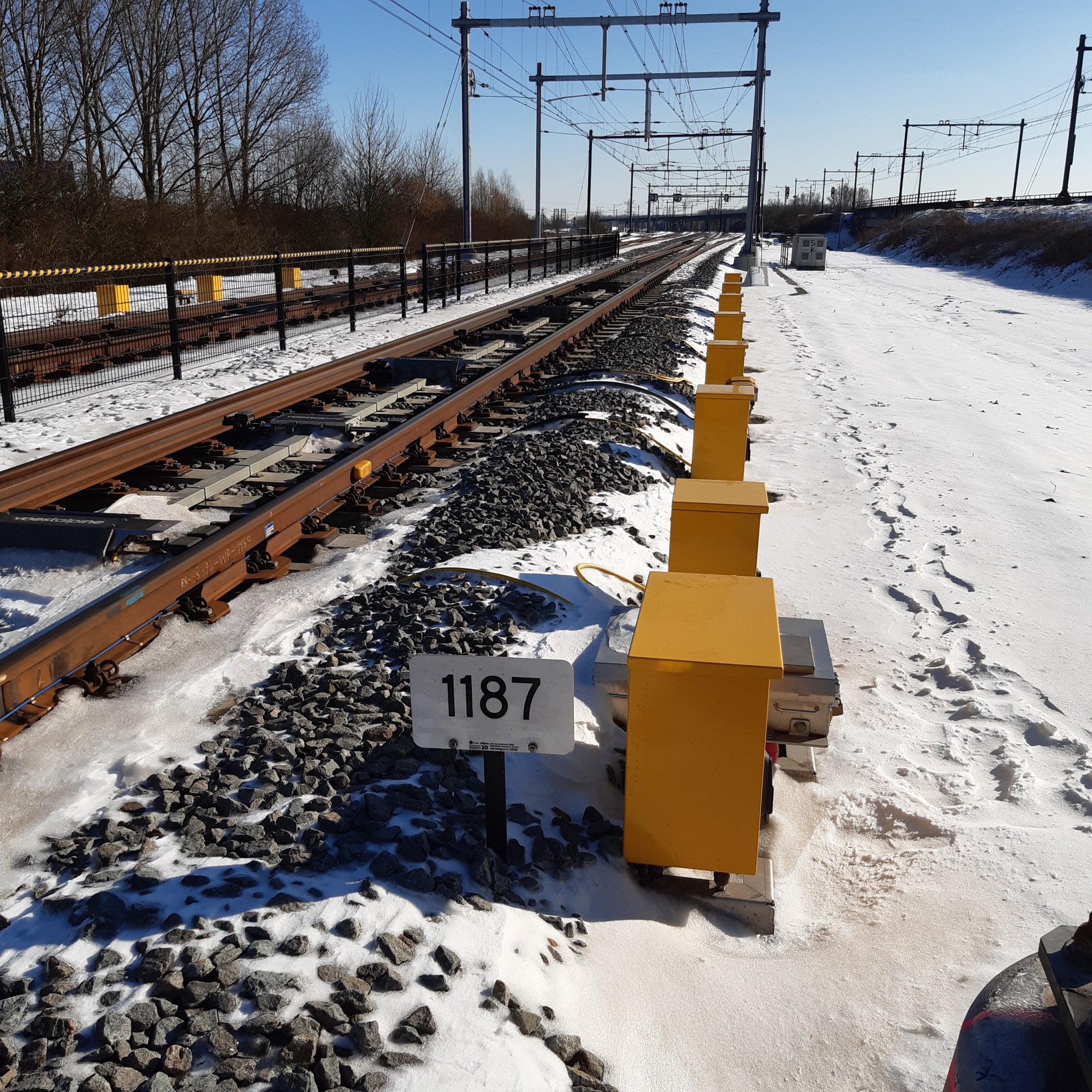