To main content To navigation
Our storiesStrukton has completed maintenance work on the Stephenson Viaduct in Leeuwarden.

The Stephenson Viaduct in Leeuwarden now good for many more years

Strukton has completed maintenance work on the Stephenson Viaduct in Leeuwarden. The viaduct is now good for several more decades. Harry van Dijk, construction site worker at Strukton Infratechnieken, was closely involved in the project.

A project of this nature once again demonstrates Strukton’s versatility and all that we are capable of doing. Strukton Infratechnieken – where I work – was the principal contractor and renovated the bridge supports, Strukton Civiel Zuid was responsible for the concrete renovations, Van Rens Mobiliteit signed on for the traffic control measures and Strukton Rail was involved in railway safety. Our sister company Antea Group was responsible for contracting and management, and – nice to know – as part of their ‘smart bridge’ initiative, installed sensors designed to predict the bridge’s lifespan.

The bridge is 170 metres long and rests on five bearings, on fifteen steel supports at each bearing. Our task was to renovate these steel supports. To be able to do this, we lifted the bridge using lifting jacks. Not in its entirety, but one bearing at a time. We placed the lifting jacks on scaffolding that we built up as high as possible around the bearing. Once the lifting jacks, fifteen in total, were in position, oil was pumped into them. The lifting jacks pushed the road deck upwards, millimetre by millimetre, up to a total of one and a half to two centimetres. The precise height the bridge was to be raised was calculated in advance.

“The lifting jacks pushed the road deck upwards, millimetre by millimetre, up to a total of one and a half to two centimetres” 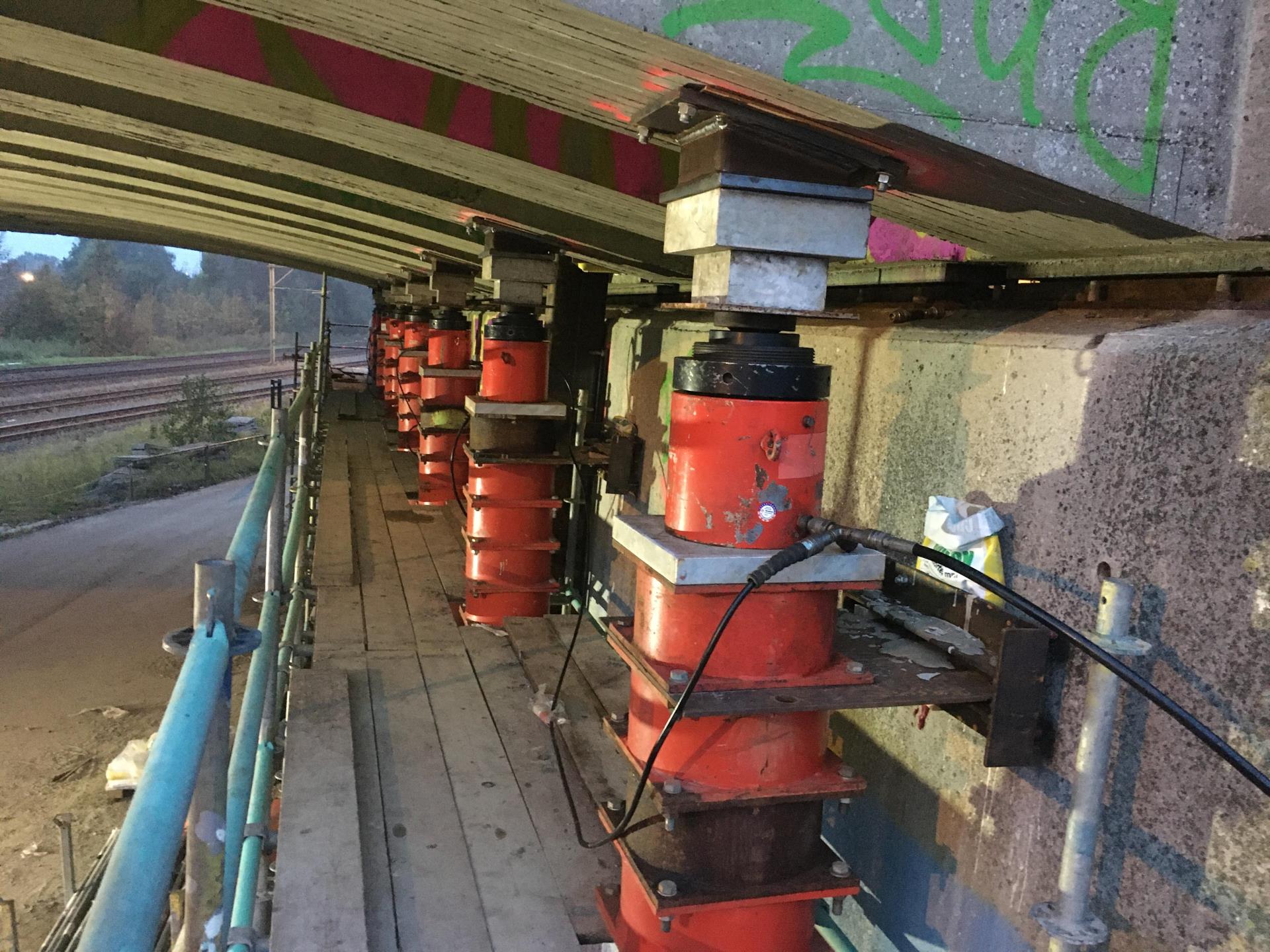 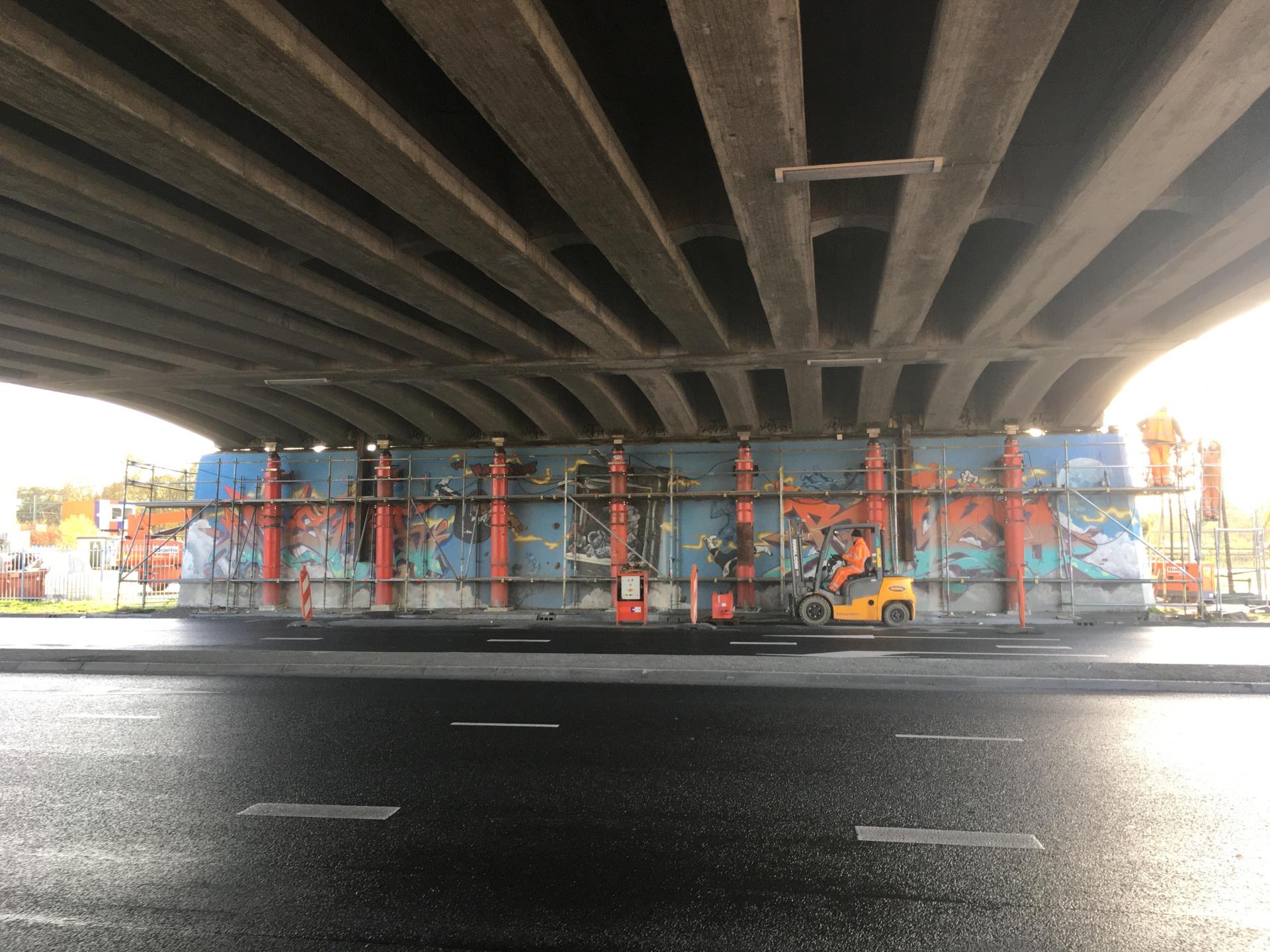 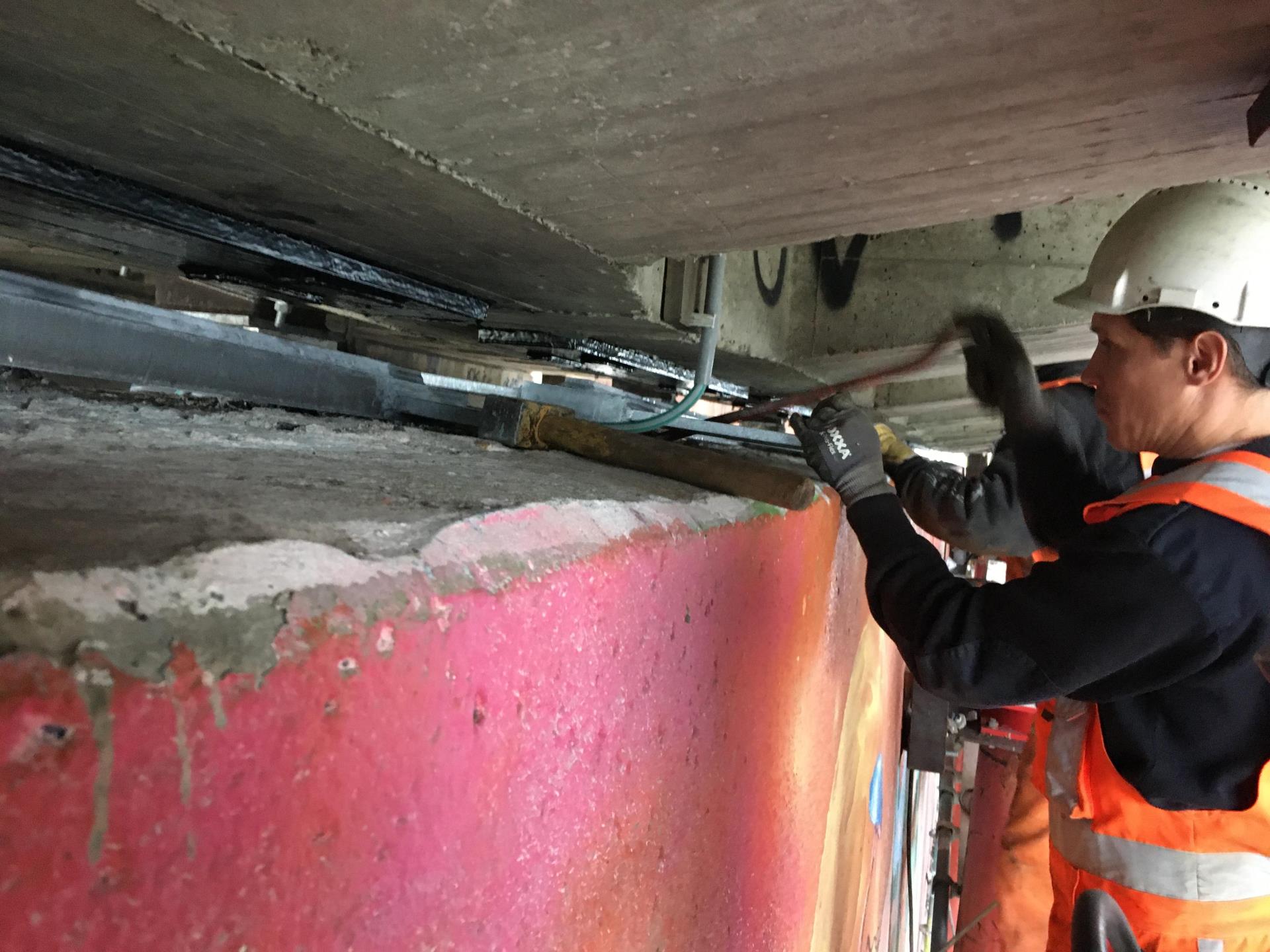 Jacking up the bridge and replacing the steel supports

Specialization in jacking techniques at Strukton

Specialization in jacking techniques at Strukton

The next step was to secure the lifting jacks with large steel ring nuts, making it impossible for the lifting jacks to settle. After the jacks were secured the oil was pumped out of the jacks and from that point onwards the weight of the road deck was resting on the ring nuts. All traffic was able to cross the bridge in confidence, as it was completely safe. The old supports were removed by flame-cutting and hacking, after which an external company sandblasted the connection of the supports to the bridge girders and then coated them. Next, we installed new steel supports and encased them in concrete. As soon as the concrete was cured, we lowered the lifting jacks, step by step, to replace the road deck in its original position.

Jacking up the bridge and replacing the steel supports was the lion share of the work, but there was more. Injecting concrete cracks, making concrete repairs and sealing concrete surfaces to make them watertight were also on our to-do list. There is one task left that we were not able to check off. We still need to replace the concrete boundary elements with stainless steel versions, but to do this requires the tracks to be shut down. ProRail would like to combine this work with other work on this railway segment, so that the tracks only need to be out of service once.

With this many Strukton companies involved, it was quite a busy affair at work, but that did not affect the atmosphere one bit. It was good and enjoyable. I consider this very important, because when you enjoy working together, your also derive more satisfaction from your work. In addition, working together was enjoyable and everyone worked well together. We helped each other where necessary and – also very important – we were watching our for each other. This is important with a view to safety. For example, when people walk below the scaffolding while we are working there, this can be dangerous. This not only applies to ourselves, but also to passers-by. While part of the bicycle path was temporarily closed, every once in a while some pedestrians or children would still pass by. We therefore had to pay careful attention all the time. After all, the devil is in the details when it comes to safety.

Curious about other stories?